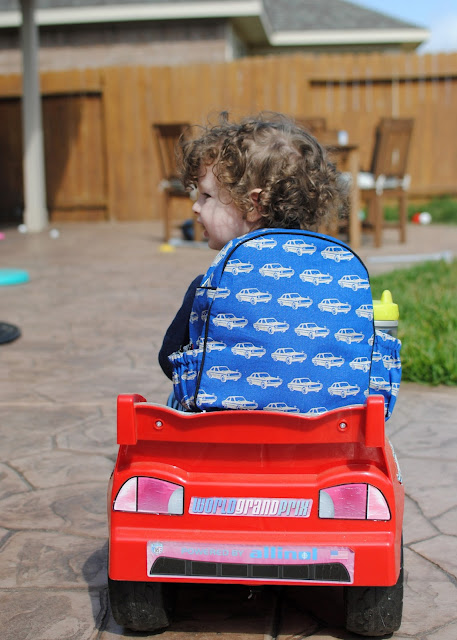 We're going to Disney World in about two weeks.  Now, when we're planning a Disney trip, I go all out.  Because I'm obsessed with Disney, and I'm pretty Type A, I make lists.  In fact, there may even be a list of the lists I need to make to prepare for the trip.  One of these lists is a packing list.  In making this list, I realized that I was making myself a pack mule by mentally adding all of the boy's plane entertainment to my bag.  Then it dawned on me.  My kid needs his own bag.  He's two and a half.  He can totally handle it! 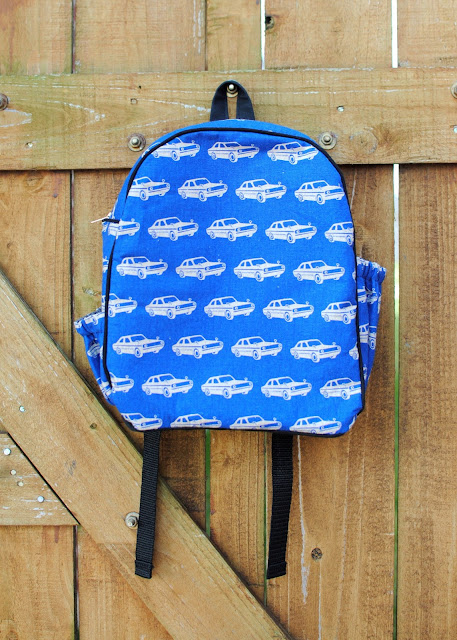 And he does have his own bag for daily use, which I usually leave in the car with his extra clothes (in case of potty accidents) and a snack or two.  However, that bag just happens to also be the bag I use in the parks when we go to Disney.  This is the worlds longest way to say:  I needed to make my kid a backpack.

One Pinterest search later, I came across Rae Hoekstra's Toddler Backpack sewing pattern.  After a quick rummage through my stash - Yes, the perfect fabric!  Oh wait, it's not heavy enough.  Oooh, stiff interfacing, check!  Wait, what about a zipper?  I happen to have a handful of metal zippers in the perfect length.  Score, not one, but TWO packs of coordinating piping!  And so on and so forth, you get the picture... - after checking my stash, I decided to go ahead and go for it, purchases would be minimal and I could get the things I needed to finish the bag at my local Joann's. 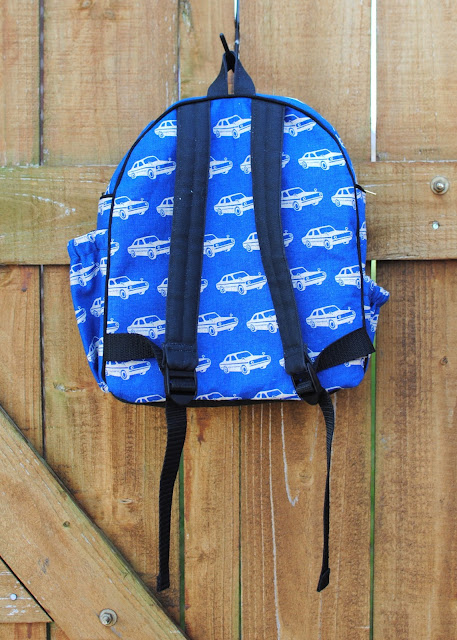 I cut the fabric that night.  The main fabric is Etsuko Furuya's mini cars for Echino in blue - gifted to me by my lovely sister (LT does have the best.aunt.ever).  For the straps I just used some black duck from Joann.  The lining is some random grey with black dots from my stash.  I think it is from a craft store because it isn't the best quality.  But it works for a toddler's backpack lining!

I also applied the interfacing, attached the zipper, sewed together the size panels, put together the entire lining, and even made up some elasticized pockets based on the instructions Lindsey from LRStitched gave the Sew South ladies for adding a pocket like this to the duffle they made at the retreat (which I didn't end up going to - more on that later).  You can find those instructions through the Sew South flickr page.  Full disclosure, there was only supposed to be one pocket - the big one for holding a sippy cup.  But I measured the cup in the wrong spot somehow and ended up with a seriously too short pocket.  But, as Rebecca pointed out on my Threadbias post about this project, it's perfect for some Hot Wheels! 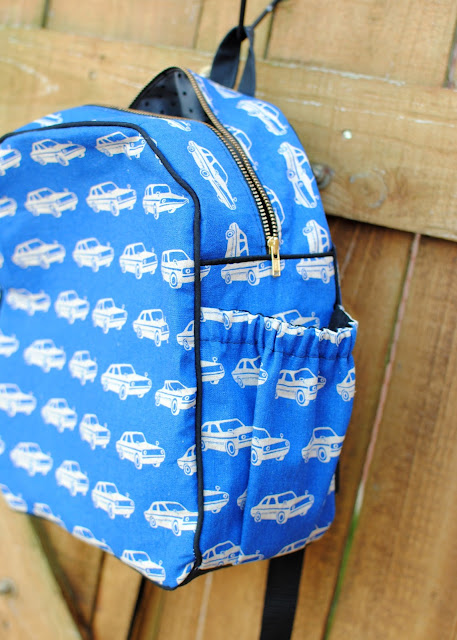 After a trip to Joann's I was able to finish the bag. I thought the pattern was very straightforward and mostly easy, until I got to the part where I had to sew the front and back pieces to the side/bottom panels.  I had some issues that didn't really have any thing to do with the pattern, and will probably resolve themselves with practice.  I had to rip out some stitches and finish the corners by hand resulting in some crumply looking corners, but that's okay because it's handmade. 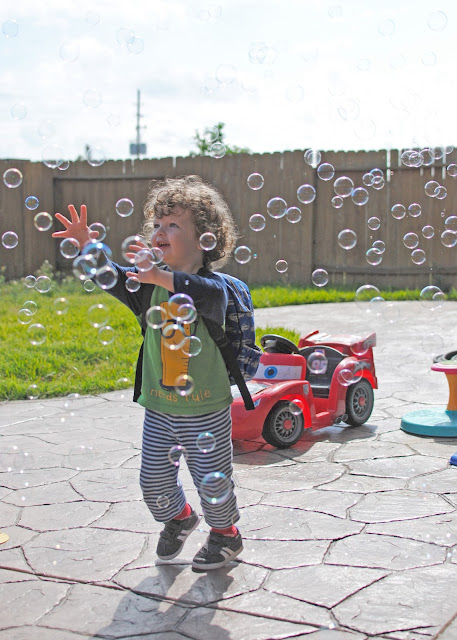 And guess what?  He loves it.  So much that he wouldn't take it off all morning.  And that's probably the best compliment ever.
Posted by Kristan at 1:47 PM
Email ThisBlogThis!Share to TwitterShare to FacebookShare to Pinterest
Labels: accessories