I'm cutting it a little close to Halloween, but I wanted to share this treat with y'all.  I'm warning you though, it's super sweet!  So make sure you bring your sweet tooth to the party when you make this.  There are a lot of treats like this floating around Pinterest and the blogosphere, but this one is a little different, so I thought I'd share in case you're the one other person in the world besides me that doesn't care for chocolate (gasp!). 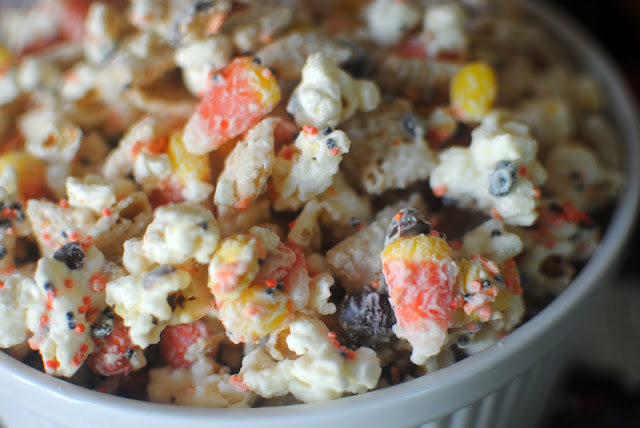 It's got kettle corn, candy corn, Reese's Pieces, Rice Chex, sprinkles, and almond bark.  It would be perfect packaged individually for a school party or just in a big bowl for a Halloween party.  The recipe as it is makes a lot (enough to fill up a gallon size zip top bag), and since it's so sweet, I recommend that one batch is probably enough unless you're feeding a large army.  Get the whole recipe below! 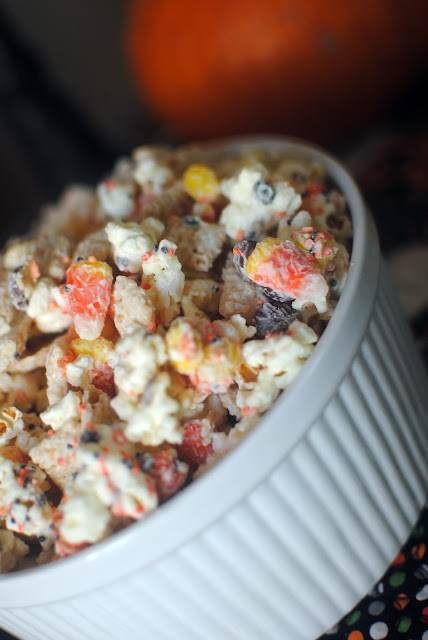 1.  Check over your popcorn for unpopped kernels and discard those.  Mix the popcorn, cereal, and candies in a very large bowl.

2.  Slowly pour the melted almond bark over the popcorn mixture, stirring with a rubber spatula until thoroughly combined.  Add in a few shakes of your sprinkles until you think it looks festive enough, continue to mix until everything is evenly coated with the almond bark.

3.  Spread wax paper, parchment paper, or foil on the counter (I used foil).  Spread the popcorn mixture on the foil in a thin layer and let dry (I left mine for about an hour).  When dry, break it up into smaller chunks and store in an airtight container or bag until ready to serve. 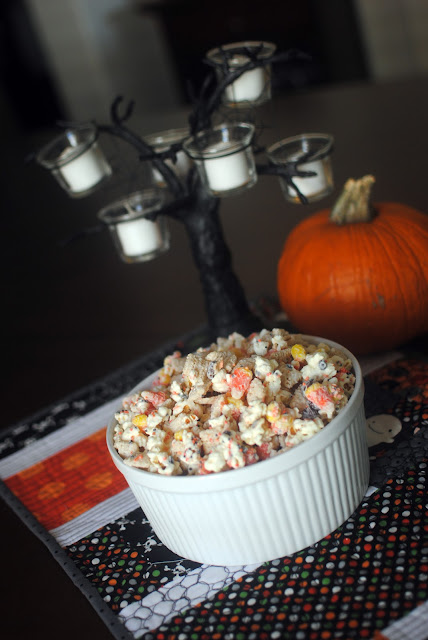 Enjoy!  Please let me know how you like it.  Feel free to experiment with other add-ins.  I think it could benefit from something salty like pretzels or even salted popcorn (not buttered) instead of kettle corn.

*edited on 10/31/2012:  I was looking through my Halloween Pinterest board and noticed that I had pinned a similar treat that was named Ghostly Grub.  Though it was a total coincidence that I named my treat "Ghost Grub", ultimately I decided to change the name of this treat to "Spooky Snack" to avoid confusion.  I don't want anyone to think I was stealing the idea or trying to put that other treat off as my own.  It really was an honest coincidence.  Thanks for understanding!

Posted by Kristan at 12:25 PM
Email ThisBlogThis!Share to TwitterShare to FacebookShare to Pinterest