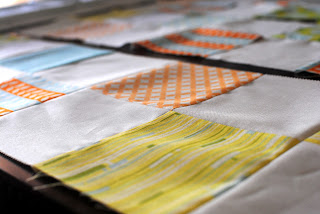 My son is my official quilt inspector.  No quilt can be declared complete until he has rolled around on it on the floor.  You know, just to make sure it works.  For being such a great employee, I've decided he needs a quilt of his own.  The last time I made him a quilt was over a year ago.  That's over half a lifetime ago in his world! 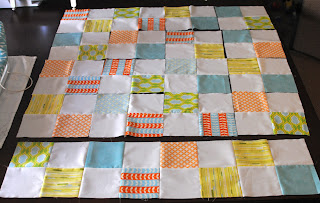 The fabrics are a little special to me because most of them are leftover from the things I sewed for his nursery.  I did not make him a quilt to match his nursery however...because little babies don't use quilts (you know, SIDS risk and all *shudder*).  Plus his grandmother was making one for him anyways, so I knew he wouldn't miss it.  Instead I made him a black, white, and red quilt when he was at the age to lay out on the floor and stare at it.  But he's grown out of that by now, and it's a little small to use to wrap up in.  And during summer, it seemed silly to make a quilt that wouldn't get used here in the hot Texas weather.  Now it's just barely starting to cool off, so it's quilt time! 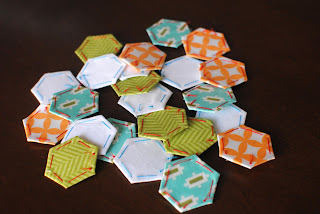 In unrelated news, HEXAGONS!  These little guys are for the pincushion I'm making for my partner in the swap on Threadbias.  You can follow me on there if you want!  Threadbias is super fun, come play!
Posted by Kristan at 11:36 AM
Email ThisBlogThis!Share to TwitterShare to FacebookShare to Pinterest